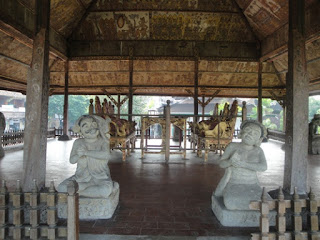 Kertha Gosa is a name of the ancient building which are relics of Klungkung Kingdom, Bali traditional courthouse located just right in the heart of Klungkung town, about 40Km on the east of Denpasar City.
Kertha Gosa, Bali traditional courthouse derives from word of Kertha means: Peaceful, and Gosa/Gosita means: announced, so literally Kertha Gosa is a place/building that used to discuss everything related to the security situation,prosperity,and fairness to all the Kingdoms in Bali.
Who was the founder of Kertha Gosa not clear,but according to Candra Sangkala that carved on the main Entrance of Kertha Gosa palace is " Cakra, Yuyu, Paksi, Paksi ",which means; 1,6,2,2 or the year of 1700 AD,when DEWA AGUNG JAMBE was ruling Klungkung (1686 AD). The main function of Kertha Gosa,during the empire, that every year precisely once every "Purnamaning Kapat",used as a gathering place of subordinate King throughout Bali, and this is where the Highest King give briefing, decisions based on considerations and requirements.
Every "Rabu Kliwon", the supreme King held a meeting with the sub-district for Klungkung purposes.
After the palace collapsed in a war against the colony on the 28th April 1908, the building function is transformed into centre courthouse.
In this hall, there's a carved golden table with 6 chairs.
Seats are sleeved a lion is a place of the King (Judge)
Seats are sleeved an ox is a place of the King Advisory
Seats are sleeved a Dragon is a place of the Kanca (Registrar)
And people who get court or punishment, sitting cross-leg with a polite attitude.
Beside the King, there is also a controller (Senior Officials Netherlands), if there are any cases that are considered special. 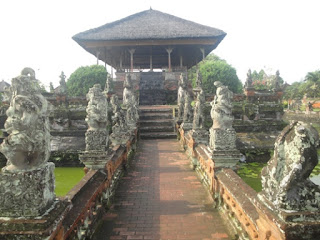 In addition,there are also other building of Taman Gili (Bale Kambang), that built contemporary with kertha gosa and the museum. On the ceiling in both building there are paintings, that telling story about depiction of human life, Karma laws, and story about  gods as the balance guardian of  worlds. Kingdom of Bali reached the golden peak era in governance,customs,arts, and culture after free out from the Majapahit Kingdom in 1478 AD, and power of the Kingdom was centered in GelGel. The palace of gelgel ended in 1650 AD,due the seizure of power by I Gst Agung Maruti, against the King Dalem Dimade, then the palace Semara Pura began in the year 1686 AD. And formerly by the kingdom of gelgel the political structure of state is closer into unity system. If the kingdom of klungkung, the political structure of state closer into Federal system, till the 19th Century into the Confederation System, it means; (to admit the highest King in Klungkung , but not as the Supreme political Authority). Kertha Gosa, Bali Traditional Building courthouse very popular for those tourists, when they are taking Karangasem - East Bali Tours Packages or even when they are taking Besakih Temple tours, because on the way they will stop in Kertha Gosa.
Sorga Bali Tours 11:49 AM
Share it:
Newer Post Older Post Home