Subak museum sanggulan tabanan or Bali water irrigation system museum is the only one museum found in Bali and also in the world which is explaining and containing about the information of water irrigation system in Bali, that located at Sanggulan village, Tabanan city. The location of Bali museum subak sanggulan is very easy to reach by cars, with the mileage if from Tanah Lot temple it will takes about 14 Kilometers away, and from Alas Kedaton holy monkey forest temple around 8 Kilometers. Regarding the background history of this Subak museum is coming from an idea of an experts of custom and religion in Bali namely: I Gusti Ketut Kaler on August 17th, 1975, who had the idea to preserve the traditional institutions of Subak (Nations cultural heritage). Essentially subak (methode of water irrigation system) has existed in Bali since ancient times to the 11th century, and still growing today, which is a reflection of identity with its characteristic of foundation philosophy "TRI HITA KARANA", the balance concepts from three causes of happiness (harmony in between humankind, harmony in between human and nature, harmony in between human and divine). 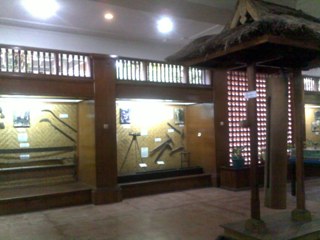 With the rapid development of science and technology, can't be denied that it will also affect Subak, and if this happens surely all traditional tools will quickly changed, so finally it will be difficult to trace and reassemble all the equipment that have had been used in the Balinese traditional life, particularly the agriculture life of subak itself. And also includes examples of traditional houses, which is following the Balinese Hindu concepts about the spatial layout commonly known by concepts of "Asta Kosala - Kosali and Asta Bumi", this idea finally realized as a heritage which then became the Museum Subak. The basis emergence of this idea is to maintaining Subak as a kind of cultural heritage. It same as other cultural heritage that found in Bali, such as: the presence of Holy monkey forest in the entire island of Bali, which existed like in Ubud village, Sangeh, Alas kedaton and other places of Bali. Also the existence of temple as other cultural heritage such as:

Beside that, the existence of subak museum is also used as a place to collect the various objects and data which relating with the traditional methode of water irrigation systems in Bali island, which has historical value that also can be used as a research and medium of learning for youth generation.

Also museum subak very important used to explore, to save, to secure, and maintain a wide range of traditional tools that used on agricultural. And in addition to be a tourism objects or recreation area Subak museum also to serve variety of information, educations and material information about the system documentary of water irrigation which is important for agriculture in Bali. Subak Museum Tabanan was inaugurated by governor of Bali on 13 October 1981. This place is containing of main museum building and the open museum building. The main museum building, which consists of sacred building with Padmasana shrines, Bedugul shrines, and others. It is completely follows the spatial layout concept of Hindu Bali, and three mandala concepts (outer, middle, and inner yard), Building for the information center and exhibition hall. The building open museum , is manifested as a Mini Subak, that used as Subak demonstration activities, ranging from irrigation system and farmers activities on the ricefields.

Subak museum open every monday until saturday from 8:00am until 16:30pm, and friday from 8:00am to 13:00pm, while on sunday and official holiday is closed. So in accordance with its history and inscription found, it can be concluded that agriculture and rice farming system already exist regularly in Bali in the year 882 AD, and according the inscription of Sukawana (882 AD) says word of "Huma" means ricefields and "Perlak" means moor fields. The existence of traditional Subak organization very unique, and in 1990 John S. Ambler the international researcher has explained that subak irrigation system looks simple but essentially this Subak organization is the advanced technology about the water irrigation methode for agriculture in Bali. Based on the survey of Subak in Bali at the end of 1999, there were 1506 with total area 97.337 Hectares.