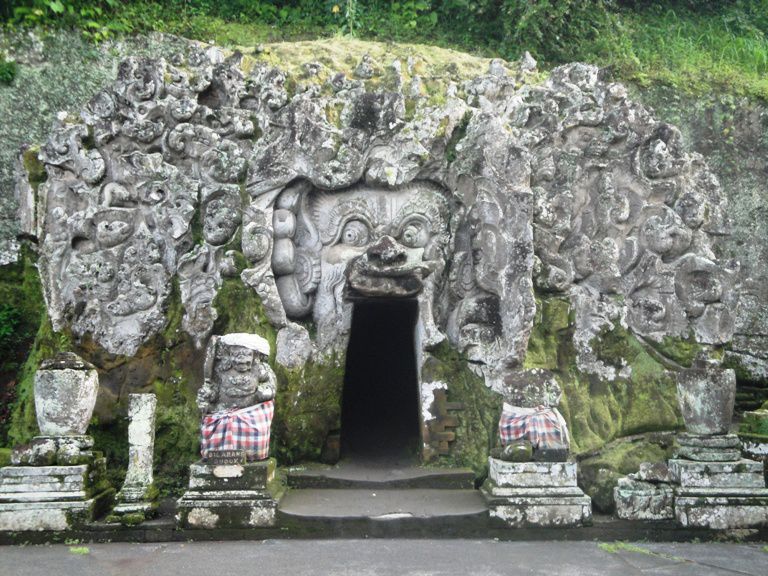 Goa Gajah temple, is one of the historic cave, which has been recognized by United Nation Organizations (UNESCO) became one of the world heritage, and this holy place often referred to as: "Bali Elephant Cave Temple" (Pura Gua Gajah), which located in Banjar Goa, Bedulu village, Blahbatuh sub-district , Gianyar regency with its mileage about 5 kilometers from Ubud tourist area while distance from Denpasar city about 45 minutes by vehicles.

Gua Gajah temple has been known since the reign of several kings on Bali island, such as:

And name of Goa Gajah temple itself actually comes from word "Lwa Gajah", written by "Mpu Prapanca" in the year 1365 AD based on inscription "Negara Kertha Gama". The archaeological site of bali elephant cave temple was built in the 11th century which at that time still ruled by King "Sri Bedahulu".

In the reign of King "Hayam Wuruk" during the era of "Majapahit Kingdom" be written, that "Lwa Gajah" located at Bedulu village serves as a holy hermitage of "Bodadyaksa", there are also mention about "Kunjarakunjapada" which means: "Dormitory Kunjara" in Sanskrit means: "Elephant".

Kunjara's dormitory is belonging to a holy hindu priest named: "Rsi Agastya" which located in Mysore (South India), and there are many wild elephants live around his dormitory. So there is a possibility of Goa Gajah temple built to remind about the Kunjarakunjapada in India.

Then "Dr. WF Stutterhiem" starts doing advanced research in 1925, and in 1950 the Archaeological sites office of Indonesia through the ancient buildings division in Bali led by "JL Krijgman", then conduct research and excavations in 1954 until 1979, and they found an ancient holy water pond with 6 (six) statues, previously was seven (7) women sculptures with shower chest.

And the existence of these fountain statue until now believed able to provide cleansing vibration aura. There is a building that saves the sculpture "Men Brayut or Goddess Hariti" who initially had a bad character, but once learn Buddhism eventually turns into loving the children, as seen on the sculpture now.

And next to the upper right side of the cave wall, found writing in letters quadratic Kediri, ie: "Kumon" and "Shy Wangsa", and its meaning still unclear known by historians. According to archaeological studies the forms of sculptures and the ancient holy water in Goa Gajah temple believed and inheritable in the-11th century.

Heritage hindu-shivaism complex at northern side and artifacts found in this region, ie:

In addition, Lord Ganesha also have 7 (seven) name in accordance with his duties from 108 names that owned, and face of Ganesha himself has an "Elephant's face", with human body who has four (4) arms, respectively hand brings something different things as symbol of:

Goa Gajah temple was built by "King Sri Bedahulu" in 1365 AD, finally the King was conquered by "Gajah Mada" in the year 1341 AD, then become subordinate kingdom of "Majapahit". In the inscription be explained that King Sri Bedahulu has the name of "King Sri Astasura Ratna Bumi Banten".

So obviously the basic concept in Goa Gajah temple is a cultural mix of Hinduism and Buddhism (Buddhism and Shivaism). This is archaeological evidence at Goa Gajah temple which is a reflection of religious tolerance in the past that still be founded now in Bali island.

According to historical information, Buddhist relics older around the 9th century until 10th century AD, and Hinduism relics in the 11th century. Pura Goa Gajah very well-known and frequently visited by tourists both domestic and foreigners when they do Kintamani Bali Volcano tour.

While the price of entrance fee ticket will be charged at IDR. 30,000 rates quoted per person and must be paid at the front counter before heading to Bali elephant cave temple.

And, we would appreciate of any given question, also we will strive to do our best to plan your holiday, because we understand very well that your satisfaction is our goal.