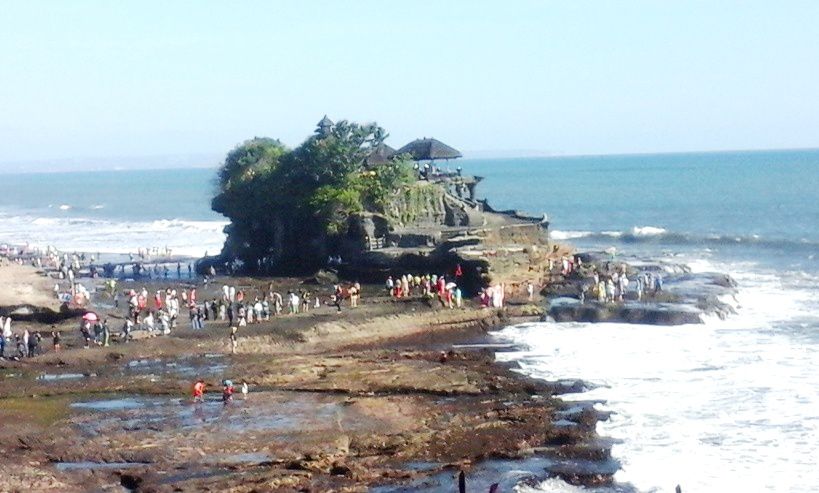 Tanah Lot Bali Hindu sea temple tourist object indeed one of the most famous tourist destinations with its breathtaking scenery of a holy place that built on the large sea boulder facing view of Indian Ocean with its beautiful silhouette of charming sight afternoon sunset.

Tanah Lot sea temple with its charming atmosphere really anesthetized the mind and attracted the heart, no wonder up to this moment Tanah Lot tourist attractions still unbeatable.

Moreover, when the high tide rises if you visit in the afternoon you will see Tanah Lot temple looks floating in the middle of the ocean with a spectacular background of sunset scenery.

Because of its so famous even among tourists there is a saying, if you never know Tanah Lot temple it means you don't know Bali island yet.

In addition to the beauty found in Tanah Lot shrines tourist area, this place is also one of the mainstay tourist destination that located on the south coast, precisely situated at Beraban village - Kediri sub-district - Tabanan regency.

So ... if you have a traveling hobby, especially when deciding to take a holiday trip to Bali island, this is one of the most popular tourist attractions that highly recommended to exploring the most famous sights at this time.

Well, to know further explanation related of these tourist places, we are Sorga Bali Tours has summarized a detailed information about top-ranked tourist destinations, which located in one of sub-districts in Bali, ie: "TANAH LOT BALI HINDU SEA TEMPLE". 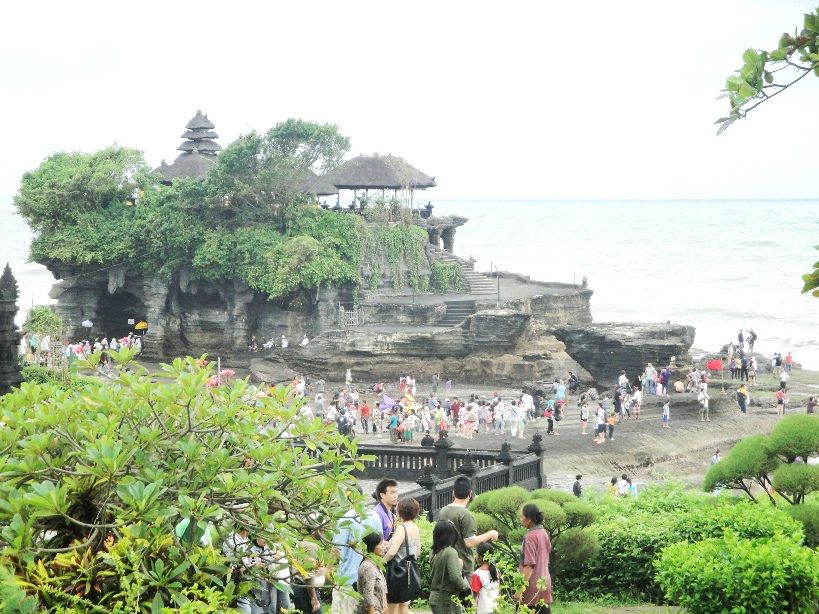 Tanah Lot temple is one of holy areas built on a large coral sea rock with its so beautiful silhouette of afternoon sunset view, also its crashing waves that can give a fresh atmosphere that made a peaceful and calm heart.

If we talk about Tanah Lot holy shrines, it is definitely very interesting to be explained,

In addition, these holy area also has function / status, as: "Dang Kahyangan / Penyungsungan Jagat" (A temple that used as a worshipping place to all Hindus in Bali island).

Moreover, Balinese people also believe that the existence of Tanah Lot Bali sea temple to be the sources of universe prosperity, which commonly used by Hindu community to express gratitude to the God (Sang Hyang Widhi Wasa) for all the blessings that have been given (especially the Happiness and Prosperity).

And to get to this holy area is very easy, because it can be reached by all types of vehicles, such as: Bus, Car or Motorcycle) with its distance about 17 Km to the south part from Kediri sub-district, Tabanan city.

While he was in Bali island, he is also often called by the name of "Ida Pedanda Sakti Wawu Rauh",

when he arrived in Lombok, also known as "Tuan Semeru" (Semeru: is a name of mountain located in East Java).

This is all as written in the inscription of "Dwijendra Tattwa", and when he came to Bali island at that time Bali is being ruled by the King of "Sri Dalem Waturenggong" with central government located in Gelgel (Klungkung regency), around the year 1411 AD or year saka 1489.

It is also explained that when he came to Bali island, Danghyang Nirartha was greeted with great respect because he was a holy priest who had a very high spiritual and loyalty to all people through Hindu religious teachings as well as increasing prosperity and overcome all problems of society life. 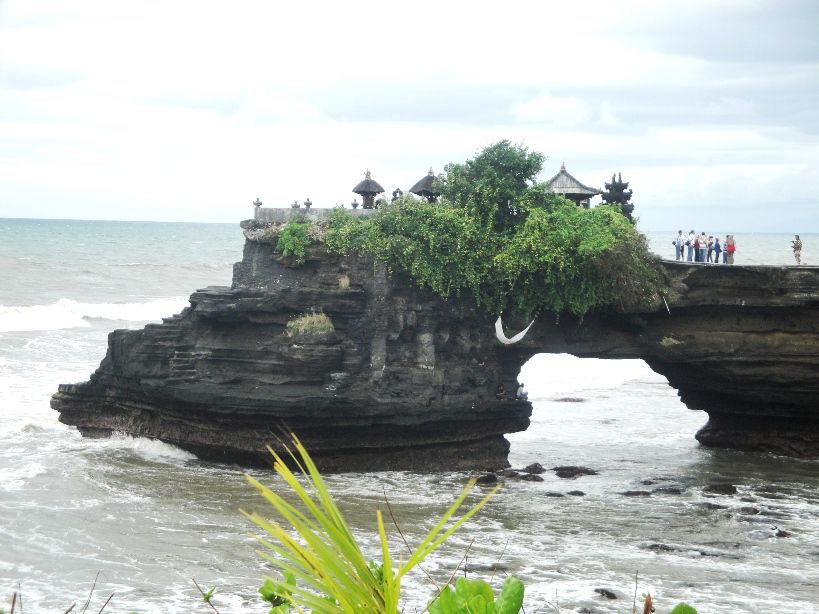 In addition to do "Tirta yatra" (holy journey), he is also well-known in the spreading of Hinduism by performing "Dharma Yatra" (dharma journey).

In his missionary journey, Danghyang Nirartha has spread Dharma teachings throughout Bali island, as well as recorded with the existence of many temples that have been built to raise spiritual awareness through Hinduism teachings.

This was also emphasized, on an occasion when he performed Dharma yatra in "Rambut Siwi Temple" (West Bali), then he saw a sacred light from southeast side and he followed it till it ended to the source which turned out to be a spring.

And not far from these sources spring, he finally found a very beautiful place called "Gili Beo" (Gili means "Stone like an island" and Beo means of "Bird"),

So Gili Beo is a big rock shaped like "Bird Beo" and here is where finally he built a place to meditate and pray to the "God of Sea (Varuna)".

From this place finally Danghyang Nirartha began to spread Hinduism teachings to the community around Beraban village, where at that time Beraban village is being led by "Ki Bendesa Beraban Sakti".

It is also mentioned that at the time all Beraban inhabitants still adhered to "Monotheism" doctrine, and in the shortest time all the followers of Bendesa Beraban Sakti began to abandon the monotheistic teachings and become Danghyang Nirartha's followers to understand more about Hindu teachings.

With the spiritual power possessed Danghyang Nirartha, he finally protects himself from the attack of Ki Bendesa Beraban Sakti by moving the large rock (sea rock that he uses to meditate into the sea, and creating many snakes with his scarf which contained around the rocks as guardian of the place).

After some time before he went on to do Dharma Yatra, Danghyang Nirartha also gave the Holy Keris known as "Ki Baru Gajah" to the leader of Ki Bendesa Beraban Sakti, and until now holy keris Ki Baru Gajah is stored neatly in "Puri Kediri" (Kediri palace).

This holy keris heritage is very sacred by everyone which also purified through the ritual ceremony that held every "Kuningan day" by holding the heirloom while walking about 11 kilometers to "Pakendungan temple" located about 300 meters from "Tanah Lot temple".

While the ceremony at Tanah Lot temple held every 210 days (6 months), precisely on the day of "Buda Wage Langkir" in Balinese calendar.

Regarding meaning of Tanah Lot word itself, comes from uric word:of Tanah means: "Piece of Land" and Lot or Let "Hard / Strong / Powerful".

So literally, Tanah Lot means: a holy place that built and standing upright on a large sea rock at south coast. 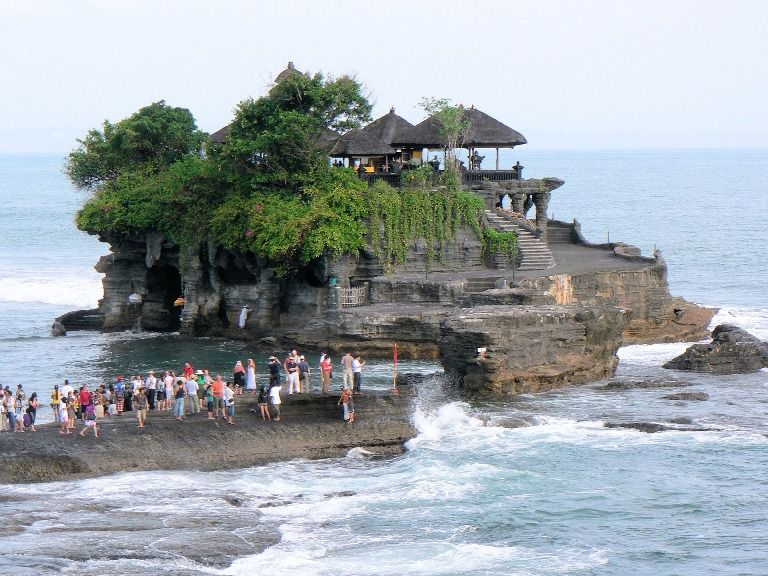 Like many other temples found in Bali island, Tanah Lot temple also has a concept of "Tri Mandala", ie:

In addition to the building region that adheres Tri Mandala concept, also in every mandala there is an existence of "Candi Bentar" with its function as a "Negative thoughts separator" which attached to a person when entering holy places.

Beside the building of "Candi Bentar" also in front of temple building are also placed 2 (two) pieces statue as symbol embodiment of "Dwarapala" (spiritually as "Gate guardians").

While the existence of several black-and-white "Sacred Snakes" (Balinese word read: "Lipi Poleng") found around Tanah Lot temple area is also spiritually believed to be the guardians of "Tanah Lot temple" itself.

So until now the existence of these holy snake also respected by Balinese people, and tourists who visit the temple can also see these snake, and given the opportunity to touch the snake in order to invoke something of blessing from almighty God related to prosperity.

In addition to the existence of "Holy Snake" there is also "Holy Water" / "Tirta Suci" located in the area of ??Tanah Lot temple.

It is also the same, through the blessings of Almighty God many of travelers also beg for something related to prosperity, happiness and tranquility in living of life in this world.

Proven to date, the existence of Tanah Lot temple is very famous and frequently visited by millions of tourists, both local, domestic and foreigners when enjoying Bali holiday tour packages.

Regarding entrance fee ticket, if you intend to visit Tanah Lot temple will be charged. at IDR. 60.000 per person.

While the enty fee for vehicle (car parking) will be charged Rp. 5000 per vehicle.

So in addition to the beauty of crashing waves view, also the panoramic charms of silhouette sunset that very tempting, so until now Tanah Lot temple became a favorite tourist destination and also as a mainstay tourist attraction owned by Tabanan regency.

As other tourist object scattered in Bali island, in Tanah Lot temple also found many souvenir shops which selling all kinds of souvenirs for tourists while visiting this tourist places.

Finally, arrived at the last explanation from us about the existence of Tanah Lot Bali sea temple.

Further explanation of Tanah Lot temple tourist attraction and how to arrange a tour to this holy area, please "Contact Us" at Sorga Bali Tours (online organizer for holidays, Adventure packages and Bali tour service activities).