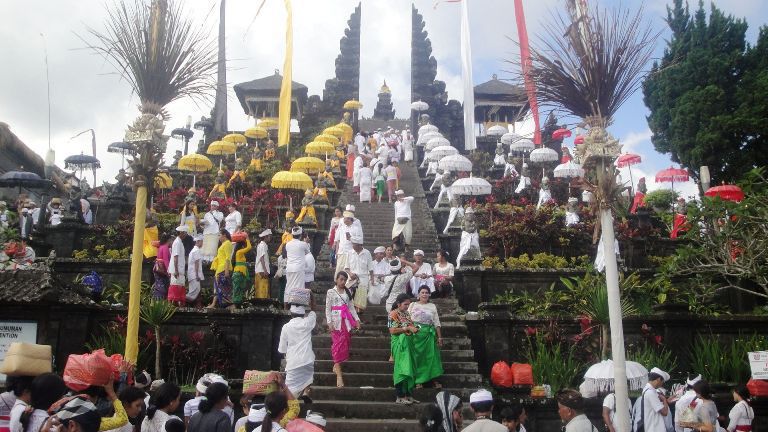 [Besakih Temple] - What really drives your intention to do a vacation in Bali island?

if there is such that question, then what will you say to answer it ?,

especially for you who has never traveled to Bali before.

To be honest, Bali does have its own charms.

Even millions of tourists who have ever been to this tiny island are also feel wonder, once they know about Bali...

they will feel so attracted to come again and again.

Then, what really the main reasons, why the island of Bali is so attractive and very famous among tourists....?

This is one of the most appropriate word to answer everything.

Taksu that believed by local society especially in Bali,

is the vibration of macrocosm energy as power of charism which can enter into the soul,

that affect the mind and hearts feeling in someone's life.

Taksu of Bali island is definitely inseparable from the life of Balinese people themself,

specifically with it's ceremony which performed in the daily life.

almost in every inch lands in Bali you will easily be able to find Pura (holy spot), as a worshipping place.

If you look Bali through google map, there you will see how this small island surrounded by thousand of temples.

And from thousand temples that scattered,

there is one of a sacred area which is becoming center of all holy places that existed in Bali, ie: "BESAKIH TEMPLE". 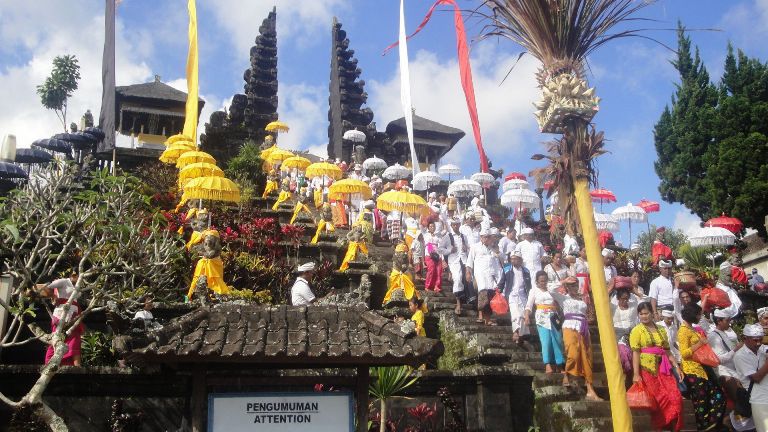 Besakih mother temple with its spiritual nuance is indeed so exceptional,

not only amongst tourists but also to local Balinese people with its top function to get final stamp of any kind spiritual ceremonials that existed in Bali.

which becomes centre of all sacred shrines which existed in the Island of thousand temples.

In addition, spiritually Besakih shrines also as crown's cakra that radiated as the highest level part in the universe balance concept,

Pura Besakih is the only one of the oldest and largest temples,

standing upright on the slopes of an active Agung Volcano (one of the highest mountain with an altitude 3.142 meters above the sea level),

Talking about Besakih temple indeed very interesting to be explained,

because this holy region is closely related with the religious journey ("Tirta Yatra") of a Hindu priest from India who previously lived in Java island,

Before Besakih temple stands as now, the existence of these region is a wild jungle and inhabited by many savage animals found in this place,

then explained Rsi Markandeya finally comes with thousands of his followers to clean Besakih area, as he got a spiritual appeal from the God.

He is also one of a Hindu holy priest who laid the first stone in the construction of Besakih temple by planting "PANCA DATU" (Five precious metals), such as:

Which become symbol balance of the universe, and all of these precious metals are planted in Basukian temple area.

While the essence construction of Besakih temple reflects the epitome of "CATUR DEWA LOKAPALA" with the presence of "LORD SHIVA" in the middle, so becomes "PANCA DEWATA" (power symbol of main cardinal directions) as nature's balances. 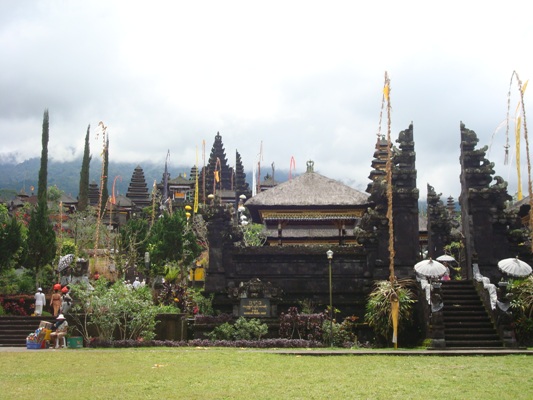 Besakih temple also one of a sacred place which have mix of original concepts from "Indonesian culture" with the "Megalithikum tradition" and "Hindu concepts" that became symbol of "TRI LOKA" (Three (3) tiers world spiritually), ie:

Moreover, Pura Besakih also a legacy of Megalithic era, with variety of "Artifacts" and "Menhir" (upright stones) found and now existed in Kiduling Kreteg temple, as symbol the power of universe.

And the existence of Besakih temple is also a fusion of "Classical Tradition" that strongly influenced from the reign of "Majapahit Kingdom" in the-13th century AD until 15th century AD. 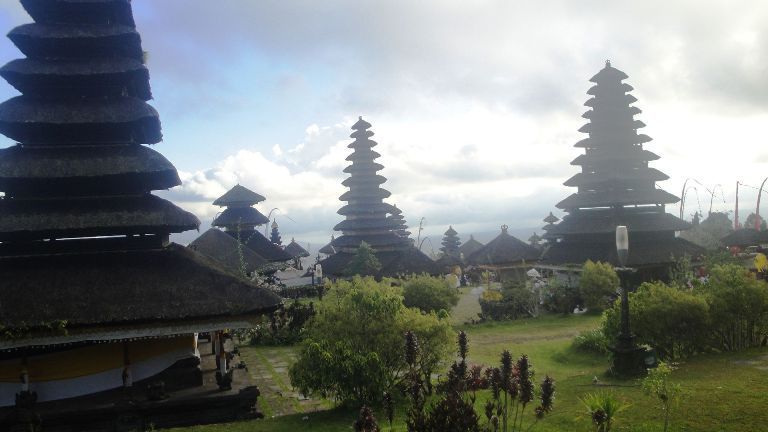 In its development, almost all the kings that ever reigned in Bali island recorded has also been doing worship at Besakih temple, such as:

Besakih temple is very spacious sacred place, with variety grandeur from the existence of Hindus temple in it.

And regarding to the main of temple's function also its status as "Penyungsungan Jagat" which means: a holy place used to worship by all Hindus in Bali, and Besakih temple was built in the-8th century AD.

While in the central yard from Besakih temple there are also "PADMA TIGA" (3 main holy shrines), which became symbol omnipotence of God that worshiped in the forms of "TRI PURUSA", ie:

Regarding the meaning of Besakih itself, comes from word: "BASUKI / BASUKIAR / WASUKI / BASUKIH" which means: "Holy / Safe".

This sacred area is one of historical site that built in the 8th century by a holy hindu priest, namely: "RSI MARKANDEYA",

while the precisely location of Besakih temple is located in Besakih village - Rendang sub-district - Karangasem regency - Northeast side of Bali (in Bali language: "Ersanya").

How to get to Besakih temple can be reached easily with all kinds of vehicles (Cars, Buses or Motorcycles),

and mileage location if from:

While the ticket price (entrance fee) will be charged IDR. 60,000 rates quoted per person and has to be paid at the front gate before heading to Besakih temple. 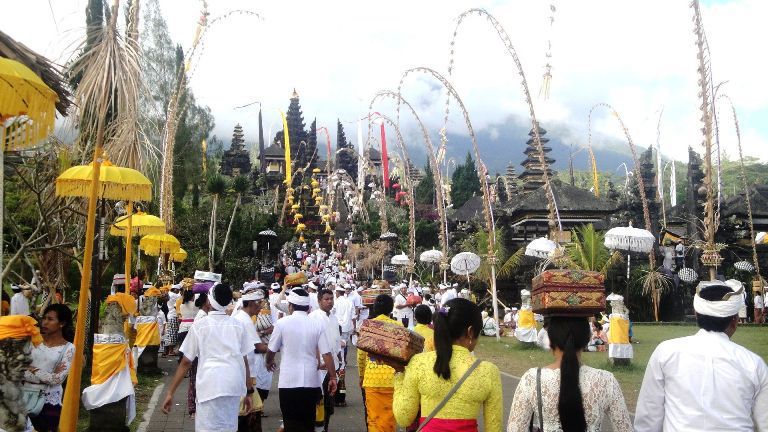 Until now the existence of Besakih temple frequently visited by a large number of tourists both local tourists, domestic or foreigners from all over the world when they are enjoying Bali holiday tour packages.

So, lastly how's your record ?.

Can't wait to bring your whole family to visit this exceptional Besakih temple ?

To know more about price car hire for a short-day tour or one full-day trip to visit Besakih Hindu Bali mother temple and explores other interesting tourist object around bali,

Finally....that's all the explanation about Besakih Hindu Bali Mother Temple tourist destination from us.

Oh ya...One more thing, if you want further explanation how to arrange sightseeing trip to this top tourist area,